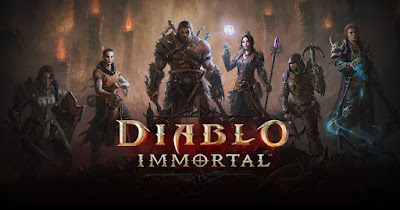 Nearly three and a half years after its infamous announcement at BlizzCon 2018, Diablo Immortal is finally just days away from its full launch on mobile and PC (in the Open Beta) after a long series of testing phases.
Blizzard has announced that servers will start operating on June 2 at 10am PST (1pm ET, 6pm CET), although mobile operators can see them appear on the App Store and Google Play sooner. time. In the early morning of June 1 as part of the gradual rollout of these platforms. Some regions in the Asia-Pacific region such as Hong Kong, Indonesia, Macau, Malaysia, Philippines, Singapore, Taiwan and Thailand will have to wait until June 22, just like Vietnam, which will also get the PC-only version of the game. For now.
Diablo Immortal, set between the events of Diablo II and Diablo III, will be the first franchise in many ways. It is the first installment to feature a free-to-play business model and the first to include full online multiplayer elements such as clans, raids, and a full range of PvP activities. Moreover, Diablo Immortal will be the most intuitive title in the series to date when it comes to controls on PC as it includes the traditional click-to-move feature, all-new WASD, and controller compatibility.
Ahead of this highly anticipated launch, we were able to meet game director White Cheng to take a look at the game's announcement, think about the current situation at launch, and get a glimpse of what's coming next.
After this original reveal and surprising reaction, the game appears to have shifted the perception of many who have tried it. Can you think of that?
When we announced the game in 2018, some players were hoping for a Diablo IV announcement and we totally understand that they were disappointed with the way we announced our game. Go Fast Now Diablo IV has been announced, Diablo II: Resurrected has been released, and we're still making content updates for Diablo III. With Diablo Immortal just around the corner, there's never been a better time to be a Diablo player.
As for the team - we were excited from the start to continue Laser Focus on creating the best possible Diablo mobile game for our fans. For the team, we like to say “Play is Faith,” and I think once we started rolling out public testing phases, the excitement for the game really started. It was a pivotal moment for us for the first time watching large groups of players populate the open world, run dungeons together, start competing for first place in the Cycle of Strife, and just enjoy the game we created. We can't wait for the world to get their hands on the game and hopefully fans everywhere will love the next chapter in the Diablo universe.

Some players feel that some dungeon content (H2/3 level) in Diablo Immortal can be done individually if the game allows. Any plans to do that?

no. We want to create some activities geared towards group content and others that are individually customized. For players who enjoy solo, we've reworked the rewards to ensure that all rewards can be completed without the need for a group.

When players suggest this, the root of the feedback is usually that the player wants to wear a set but by the time they collect all the set pieces together, the stats for long-found items are no longer high enough to warrant the set bonus. We addressed this by doing the stats for selected items primarily by setting your difficulty level rather than boosting it with your Paragon level. This means that the stats for selected items will stay relevant to your character for a longer time.
How satisfied are you with the current state of PvP? What kind of add-ons and mods can PvP fans expect in the near future?
PvP is one of those features in a game that requires constant iteration and cooperation with the community. We've made a lot of changes to the game during our testing periods and will continue to do so in the future. Immortal is the first Diablo to have a full-fledged PvP system with The Cycle of Strife, and there is a lot of amazing content for players. All of our PvP content is based on combos, and within that, there are different modes: 8v8 Battlegrounds, asymmetric Raid the Vault, and then a 30v1 epic in which one player effectively takes on the role of a giant raid
coach while 30 other players try to take down the player.
How often do you plan to release new content for Diablo Immortal such as new regions, classes, and raids?
The launch is just the beginning of Diablo Immortal. We will have constant updates to the game on a regular basis. Every month you can expect something new to be added. Things like Battle Pass updates, new cosmetics, and live in-game events that you can often expect. New regions, Helliquary bosses, dungeons, and new layers are already in the works that will come with a regular rhythm after launch for years to come. And of course, you'll get all of this content for free!
Have there been any monetization changes since the last beta? Are there any plans to make the Legendary Badges and Gems more available to non-paying players?
Yes, we have significantly improved the experience of players using Crare Crests. We've made major changes to runes, embers, and manufacturing costs to make it easier for players to earn legendary gems through regular play.
The game has been removed from app stores in Belgium and the Netherlands. Can you reveal if there are any plans to make the game available there in the future?
Diablo Immortal will not be available in Belgium and the Netherlands. We fully appreciate the desire of local players to access our game, and this is related to the current operating environment of the games in those countries. We don't have any additional details to share right now about how it might change in the future.
Are there HD / high frame rate options on PC?
Regarding resolutions and frame rates, Diablo Immortal on PC supports 1920 * 1080 and above, and the frame rate is not specified. It also supports wide screen.
Are there any plans to support Macs? What about potential console versions, given that consoles are already supported?
We have no plans at the moment to expand to other platforms. We know that there are a lot of gamers who prefer the Mac and console as their primary gaming platform, so of course we will continue to explore more options for the future.
Regarding that last point, can you share the final list of compatible consoles at launch?
We have a blog that just came out a few hours ago that goes into all the nitty-gritty of everything players need to know before diving into Immortal when it launches. We've been expanding our console support since we held a Closed Beta earlier this year, and the blog contains a complete list of compatible consoles across all platforms. You can check out the blog here!
Edit This Article
Tags Gaming